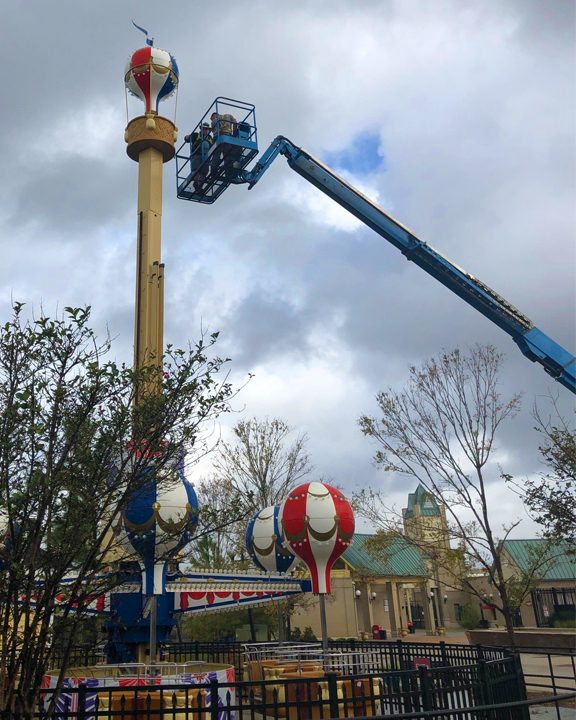 The area between Mobile, Alabama, and Pensacola, Florida, took the brunt of the category 2 storm with widespread wind damage, storm surge flooding, and over 20 inches (510 mm) of rainfall. Several tornadoes also occurred as well. The Park at OWA contacted Premier Rides after Sally, the first hurricane to make landfall in the U.S. state of Alabama since Ivan in 2004, and a storm with maximum sustained winds of 105 mph (165 km/h), had finally traveled beyond the park.

Steve Honeycutt, General Manager of the Park at OWA commented. “I appreciate Premier Rides jumping in to help us out during a very difficult situation, and the promptness in which they responded is nothing short of impressive.”

The Premier Service Rapid Response team traveled to the park to perform inspections of all 22 rides and attractions at the park to identity damage sustained from the hurricane, to work with the maintenance team to perform simple repairs and to determine any other necessary repairs to be completed prior to the park’s reopening.

Jim Seay, president of Premier Rides, commented, “Steve Honeycutt is one of the most passionate leaders in the industry so when he calls you jump. Premier has supported Steve with other technical challenges in the past and we appreciate he turned to us again. It is impressive how quickly the team at the Park at OWA reacted following Hurricane Sally. They worked very hard and not only had their hands full taking care of their own facilities, but the park’s parking lot became ground zero for the regional recovery effort with over 1,400 linesmen from all over the Southwest setting up fully operational living quarters. I am honored that Steve called on us again. We are humbled that our reputation for quality and service prompted the call to action.”

The Park at OWA reopened to the public just sixteen days after Hurricane Sally passed. Locals were welcomed to the park for free to in recognition of the difficult recovery and as a way of providing a welcome break from the countless hours everyone had been spending on cleanup efforts.

Seay added, “In these challenging times, Premier Rides recognizes that the ability to pivot and to support our valued clients in different ways is an important facet of our business.  We are pleased to be able to support clients like the Park at OWA.”

Premier Service, a division of Premier Rides, offers the largest after-market service division in the attractions industry, providing spare parts and service to all manufacturers’ rides, not just those supplied by Premier.