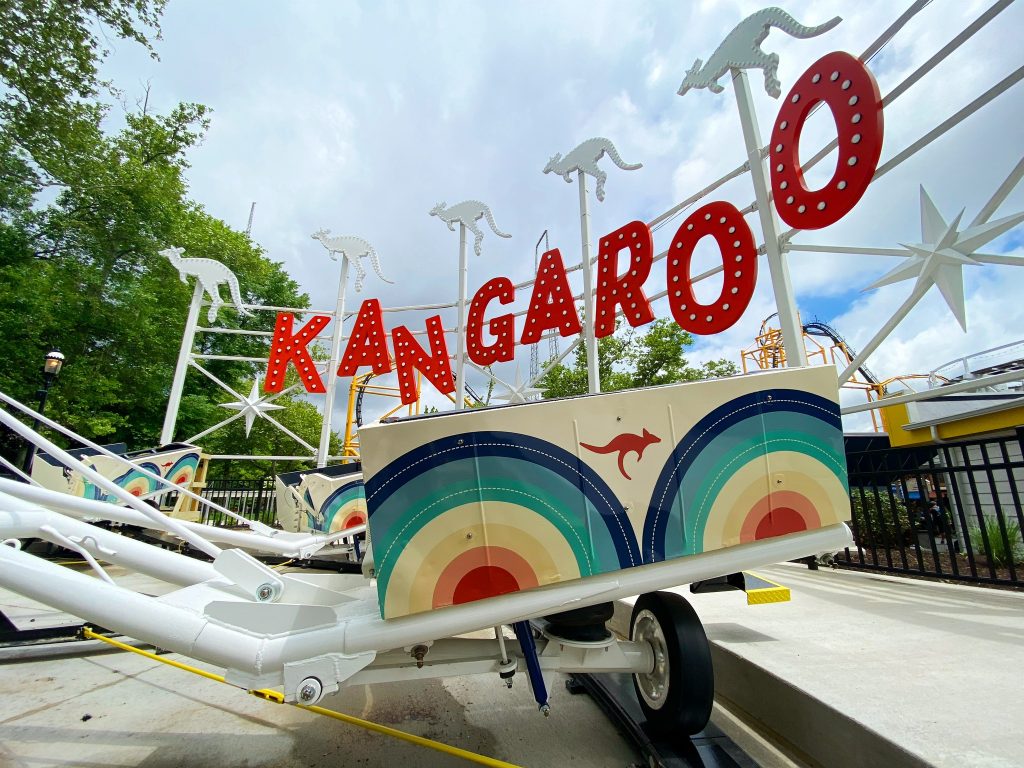 WEST MIFFLIN, Pa. — With much anticipation, Kennywood’s iconic Kangaroo ride has bounced back into the park for its official season opening over Memorial Day weekend. In its same park location and appearing much like the vintage ride it is, the beloved ride is refreshed, updated and ready for generations of families to hop aboard.

Its understated appearance and longevity is the very thing that has created its endearment to Kennywood guests. It was even the inspiration for the park’s mascot, Kenny Kangaroo.

“It’s simple but not too dull,” said Nick Paradise, director of corporate communications. “People really look forward to riding it year after year. You never get too old to ride the Kangaroo.”

But that understated appearance should not be taken for granted. It was with great work between Kennywood and Premier Rides, the company that took on the task to completely redo the ride, to keep that look. But underneath it all, it is state-of-the-art.

“Our goal was to update Kangaroo, but, more importantly, ensure we preserved the long-standing history of this timeless ride,” said Jim Seay, president, Premier Rides. “By modernizing the Kangaroo, we can provide many more generations of Kennywood fans the opportunity to happily hop aboard for decades to come.” The Kangaroo debuted in the park in 1962. It was dubbed early on as a coaster even though it wasn’t ever officially considered one. But its creator, John Norman Bartlett, tagged it a “Flying Coaster” due to the single, sharp slope in its circular track that would move its cars up into the air.

At the end of the 2020 season, Kennywood officials announced they were retiring four rides including the Kangaroo. Fans weren’t happy about that decision. But Paradise said park officials had left a door open.

“The pandemic led to plans changing a number of times throughout 2020 and 2021, when it came to adding and retiring rides at Kennywood,” Paradise said. “While the decision to retire Kangaroo after the 2020 season was made with the intent of being final, we left the door open for the possibility of bringing it back, based on cost of needed modernization enhancements and guest response.”

Based on the outcry from the Kangaroo fans, officials began looking at the cost of redoing the ride.

The ride had already been dismantled and the site where it had been located sat empty for the 2021 season. Officials reached out to Premier Rides for help. Seay said they received the ride dismantled and began going through it.

﻿”They asked Premier to review the ride from top to bottom and to use the latest cutting edge analysis technologies and safety standards to both verify the condition of the ride and also to confirm the ride’s ability to continue running for the years to come,” Seay said.

According to Seay, Premier was brought onto the project as a result of other rehabs Premier Rides Service Department had performed on other attractions that were similar in scope, such as the Honker Dinger Derby at Sesame Place in Langhorne, Pennsylvania.

“The official decision was made last summer,” Paradise said. “While we do not disclose costs, I can say that we analyzed the projected return on investment for reviving the Kangaroo with its established guest affinity compared to bringing in a new attraction.”

The project turned out to be a nine-month team effort between Kennywood’s maintenance department and Premier’s engineers and shop craftsmen. The project was completed ahead of the initial schedule.

Unique to Kennywood, which is part of Palace Entertainment, Premier also was tasked to work with the highly respected German TÜV SÜD organization to get their input and recommendations for the ride. Premier engineering produced a very accurate Computer Aided Design (CAD) model of the ride that was based on extremely detailed measurements using the newest ultrasound techniques.

Park officials not only shared the model with park fans, they also let them choose between two different coloring palettes as well as the overall theme. The winning choice, by a landslide, was to honor the ride’s history and keep the attraction “vintage.”

Kangaroo’s throwback styling will extend to the motif of each flying coaster car and a new LED lighting package. “The modeling guided the rehab efforts and, combined with an extensive upgrade to current state-of-the-art ride control system electronics, the Kangaroo will reopen with a near-new appearance and an impressive amount of new technology,” Seay said.

Park officials were pleased the ride could be situated in its original location in the park. Paradise said some nearby trees had to be removed to allow for a larger display and to light up the area to really highlight the attraction.

With its return, Kennywood officials said it is the last ride of its kind operating anywhere in the world.

“I think it is important to point out that Kennywood’s management deserves a lot of credit for making the decision to restore the ride as opposed to replacing it with a ride that didn’t have the same generational appeal as the Kangaroo,” Seay said. “Their investment means generations to come can still enjoy the legacy attraction which is very special.”